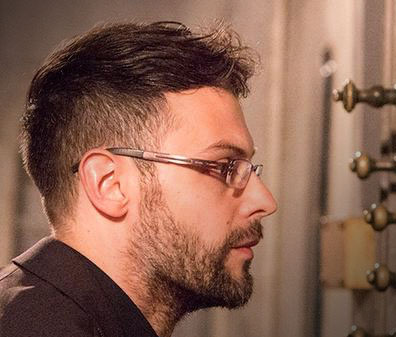 Dr. Roland Dopfer was born in Bavaria (Germany). He studied Catholic sacred music at Düsseldorf ́s Robert Schumann Academy of Music and received a special distinction for his organ playing as part of his director of church music qualification. Graduate studies in organ and harpsichord performance led him to the Cologne Academy of Music and Dance. His teachers included international organists Margareta Hürholz, Martha Schuster, Nigel Allcoat and harpsichordist Gerald Hambitzer. Following Christoph Bossert ́s soloists ́ class at the Academy of Music in Trossingen, Dopfer took his concert examination on the organ.

Dopfer got a doctoral degree for his musicological thesis at the University Wuppertal, supervised by Hans-Joachim Erwe and Thomas Erlach.

From 2005-2013, Roland Dopfer was director of music at the Archbishopric of Cologne and was based at the Catholic Basilica and central church of St. Lawrence in Wuppertal. Among 2012 and 2013 he was organ instructor at the Cologne Academy of Music and Dance and from 2013 to 2018 Dopfer was Professor of Music at the University of the Arts Bremen, where he was teaching the subjects early music organ, basso continuo, organ recital and organ improvisation.

Since 2016 Dopfer is organ instructor at the Hanover University of Music, Drama and Media and since 2018 as well music educator, music therapist and organist in a psychotherapeutic institute in Switzerland (Canton Zurich).

As an organist and harpsichordist he performed in Mexico, USA, Oman, Spain, Italy, Luxemburg, Netherlands, United Kingdom, Switzerland and Germany and gives courses on organ recital and interpretation, basso continuo practice and organ improvisation. He performs a.o. with baroque violinist Claudia Hoffmann, organist Margareta Hürholz and the early music ensemble Sir Moro. Dopfer has recorded a series of CDs, including at Speyer Cathedral and on the Balearic Islands, and worked on TV productions for ARD, ZDF and WDR (Germany) and IKON (Netherlands).