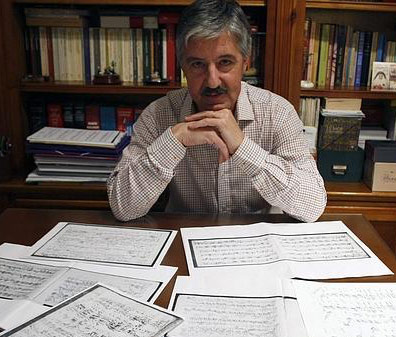 Enrique Igoa studied music at the Real Conservatorio de Música de Madrid, Berklee College of Music, New England Conservatory in Boston (USA) and in courses of Darmstadt (Germany), in the careers of Piano and Composition. He is also Doctor in Hispanic Music (Universidad Complutense), with a doctoral thesis on the sonatas of Antonio Soler. He has been professor of Harmony, Counterpoint and Composition in several conservatories, from 2001 professor of Musical Analysis and from 2018 professor of Composition in the Real Conservatorio de Música de Madrid. He is author of numerous papers and two books on musical analysis. He has written compositions for solo instruments, duos, trios, string quartet, guitar quartet, chamber ensemble, percussion ensemble, vocal music, choral music and electronic music, as well as works for guitar, violin or chorus and orchestra, symphonic orchestra, scenic and dance works. He has received commissions from numerous performers, festivals and Ministry of Culture. He has been awarded several international composition prizes in Spain, Switzerland, Czech Republic and United States.
His works have been premiered and played in Festival COMA in Madrid, Festival Internacional de Alicante, Festival Internacional de Santander, Festival of Contemporary Music in Bilbao, Festival of Choral Music – Jihlava (Czech Republic), Festival Musique Sacree (Fribourg – Switzerland), etc., and in other concerts in Spain and rest of Europe, Israel, Cuba, Mexico, Venezuela, China and United States.

Enrique Igoa is Member of Annuary Who’s who in the World from 2009 and Member of 2000 Outstanding Intellectuals of the 21st Century from 2010 (International Biographical Centre, Cambridge, England).