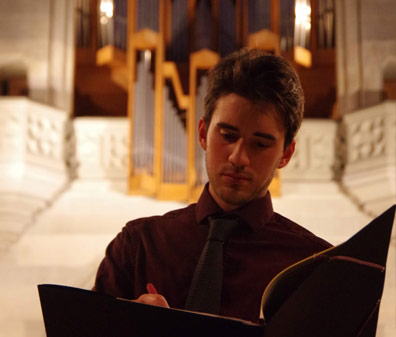 Composer and organist, Grégoire Rolland receveid a master degree in music theory (harmony, counterpoint, fugue), an analysis diploma, a master degree in organ and an orchestration diploma at the Conservatoire National Supérieur de Paris (CNSMDP). He also has a Master degree in composition at the Haute Ecole de Musique of Geneva, a Bachelor degree in the music and musicology division of the Sorbonne University, and a degree in pedagogy.

Grégoire works on the correlations between many forms of art and their techniques of production. His interest in the traditional music of Asia has also been reflected in some of his recent works. Grégoire Rolland has composed for both solo instruments and orchestra. He was awarded prizes and commissions of several foundations and prestigious institutions (Notre Dame of Paris, De Lacour Foundation, International University of Paris – CIUP, Toulouse les Orgues, Radio-France, Sylvanès Abbey, …).

He is currently fulfilling several commissions for new compositions and continues to give recitals both in France and abroad.