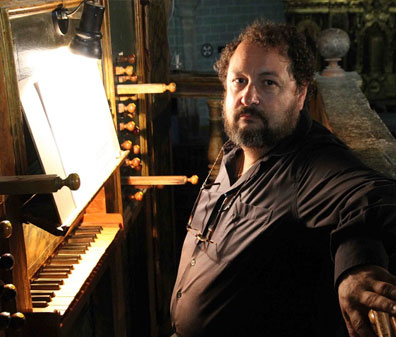 Born in Zaragoza, Javier Artigas began his musical education in Escolania de Infantes del Pilar. He studied organ and harpsichord –with the highest marks, won Premio Extraordinario– with J. L. González Uriol and in monographic courses with Torrent, Radulescu, Alain, Rogg and Schnorr. He gives concerts in the most important Organ and Early Music Festivals, as a soloist, and as a member of chamber musical groups like Ministriles de Marsias.

Internationally recognized as a specialist in Spanish Historical Music, he is responsable for Jimenez and Bermudo New Works Edition, as well as the complete works by A. Cabezón.

He teaches in different Universities and Higher Musical Education Schools about Interpretation of Early Music. Before he moved to Murcia he was the principal of the organs in the Basílica del Pilar in Zaragoza. In Murcia Region he was Coordinator of the Organ Restoration Plan, Director of the Organ Festival as well responsable for the restoration of the Merklin Organ (1854) in Murcia Cathedral.