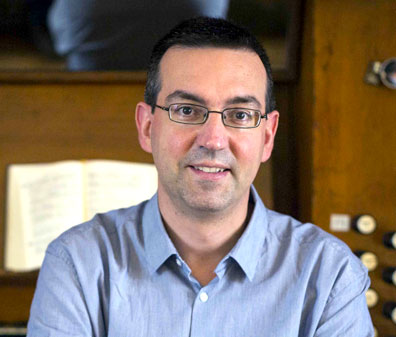 In 1999 Raúl del Toro won the Prize “Andrés Segovia – J.M. Ruiz Morales” in Santiago de Compostela. In 2000 he won, as a member of the ensemble La Trulla de Bozes, the First Prize at the XXXVII International Competition of the Festival Van Vlaanderen in Bruges (Belgium). In 2003 he took the Post-Graduate Diplome of the Department of Musicology at the CSIC.

Raúl del Toro has performed in Spain as well as in Germany, Belgium, France, Italy, U.S.A., Luxembourg, Andorra, Malta, Poland, Romania, the Neetherlands, the Philippines and Japan. He has also made several recordings of solo organ music and ancient music ensembles. His performances have been broadcast by Radio Clásica (RNE) and other broadcast chanels (TV and Radio) of several countries.

In 2002 he was appointed organ teacher at the Conservatorio Profesional de Música in Salamanca, and titular organist of the historical organ (Pedro Liborna Echevarría, 1709) of the San Jerónimo Royal Chapel at the University of Salamanca.

Since 2005 Raúl del Toro teaches organ at the Conservatorio Superior de Música de Navarra. He also taught at the Pablo Sarasate Conservatory in Pamplona, and he has been guest teacher at the International Organ Course of the University of Cantabria.

From 2014 to 2016 he was director and presenter of the weekly program “El Órgano” on the Radio Clásica radio station of Radio Nacional de España. He is titular organist of the historic organ (John Hele & Co., 1878) at the El Salvador Church in Pamplona, and director of the Schola Gregoriana Gaudeamus.

In September of 2017 he got the PhD degree from the Public University of Navarre with his doctoral dissertation dealing with the organ music of P. José Antonio de Donostia (1886-1956). Due to this dissertation, Raúl del Toro was rewarded with the Prize “Orfeón Donostiarra/University of the Basque Country” in the modality of musical research.