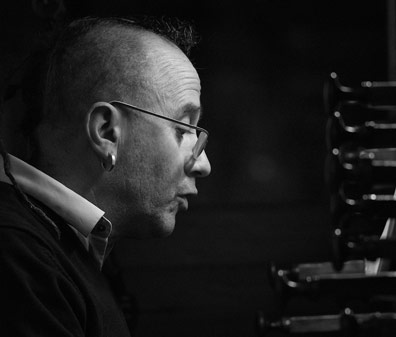 Throughout more than thirty years of career, he has travelled around the world, from Uruguay to Lebanon, passing through Estonia or the Azores Islands, in four continents and almost every corner of Spain, playing the organ. On the other hand, between CDs and books, he has published more than thirty volumes, proof of his research and dissemination of the ancient Iberian and Aragonese musical heritage.

He began his musical training with Mr. Bienvenido García, canon organist of the cathedral of El Burgo de Osma, his native town, following the ancient tradition of teaching in the Spanish cathedral music chapels. Raised and trained at the keyboard by the professor José Luis González Uriol, the surnames Riaño, Jansen, Kastner, Prensa and Calahorra have been references of mastery and art.

A recognised expert in Iberian musical heritage, mainly organs, for many years he has advised, and continues to advise, the governments of Aragon and Castile and Leon on the restoration of historic organs. He directs two collections at the Institution “Fernando el Católico”: one of recordings on historic organs (19 vol.) and another on Aragonese musical heritage (4 vol.), and also directs the musicology journal of this institution, Nassarre. He is a tenured professor of harpsichord at the Professional Conservatory of Music in Zaragoza and for 12 years he has been teaching organ at the course of Briones (La Rioja). In the 2016-2017 season he directed and presented the programme “El órgano” on Radio Clásica (RNE), with a total of 39 one-hour programmes of his authorship.

An unquestionable expert on historic organs in Aragon and a reference in Spain, over more than three decades he has catalogued most of Aragon’s organ heritage, as well as carrying out restoration projects for the organs of all the Aragonese cathedrals with historic organs (Albarracín, Huesca, Jaca, Roda de Isábena and Tarazona), and important archive studies for the organ of La Colegial of Daroca, La Seo of Zaragoza and the cathedral of Segovia.

In 2021, the Directorate General of Heritage of the Government of Aragon personally commissioned a selection of historic organs from among all those in the Autonomous Community for their subsequent declaration as an Asset of Cultural Interest (B.I.C.), followed by the 52 corresponding studies on those selected to inchoate the files, publishing institutionally in the BOA of 15 February 2022, a historic event that represents the greatest protection ever given to the historic organ heritage in Aragon.