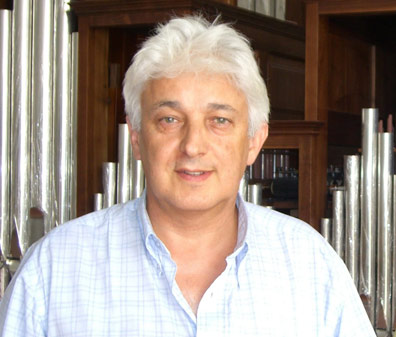 Born in Torquemada (Palencia) in 1953. University studies in Pedagogy and Theology at the Catholic University of Chile.

His professional career as an organ builder began with a solid training in the study of Music and the Organ at the Conservatories of Valladolid, Santiago de Chile and Barcelona, with Montserrat Torrent.

He learns the trade of organ builder for five years with Gabriel Blancafort and his team of artisans in Collbató (Barcelona), where he is trained in the style of the classic organ, with mechanical transmissions, which is in line with our best tradition.

In 1982 he founded his own workshop, in which he performs specific tasks of management, project, design and harmonization of the organs built or restored there.

The ACITORES, Organería y Arte, S.L. has done extensive work:
– 90 restorations of Historic Organs, including the organs of the Cathedrals of Burgos and Malaga; those of various parish churches in Palencia (Támara de Campos, Santoyo, Frómista, Amusco, Baltanás, Cevico de la Torre…); the organ of the Convent of San Agustín in Manila (Philippines) and the two Organs of the Church of the Clerics of Oporto (Portugal).
– Reconstruction of the great organs of the Cathedrals of Astorga, Logroño and Córdoba and that of the Mosteiro de Pombeiro (Felgueiras-Porto) in Portugal.
– Construction of more than a hundred new organs, highlighting among them those of the Auditoriums of the Higher Conservatories of Murcia and Salamanca and the Professional Conservatories of Palencia, Orense, Segovia and Cáceres; the great organs of the Basilica of Covadonga and Santo Tomás de Avilés (Asturias); Sanctuary of Santa Gema, Sagrada Familia de Tarrasa and Santa María de Capellades, in Barcelona; Parish of the Assumption of Rentería and San Nicolás de Bari in Orio (Guipúzcoa), etc.

He has participated as a speaker in Congresses on Spanish Organ; Granada International Organ Week Forum; International Symposium of the Historical Organ of Castilla y León, (University of Salamanca); Master of Restoration and Rehabilitation of the Patrimony of the University of Alcalá de Henares; Organ Congress in Latin America (Oaxaca – Mexico). XXVIII Conference on the Cultural Heritage of the Church organized by the Spanish Episcopal Conference (Tarazona 2008).

He has collaborated with various articles in magazines such as “Ars Sacra”; the reissue of the “Complete Art of the Organ Builder” by Mariano Tafall; Prologue of one of the volumes of “El Organo Barroco Español” by J. Angel de la Lama”; and several booklets on new or restored organs (Logroño Cathedral, Covadonga Basilica, Cevico de la Torre, Medina de Rioseco, among others.)